At face value, production timelines seem relatively simple. You start with an idea and create a proof of concept or vertical slice. Once an investor greenlights your prototype, you have funding to flesh out a complete alpha. Then, with lots of testing, bug fixing, and polishing, you complete a beta.

There’s only one problem with this simple mindset. It is very scarce for these production timelines to occur without a lot of burnout, missed deadlines, and failed expectations. There are two critical issues with this approach to project management.

You are not omniscient, and you can’t foresee every task, requirement, and bug from creating your idea to the release of your product. So I’m suggesting a strategy that recognizes our inability to foresee the future yet recognizes how our present actions can impact it.

It’s impossible to recognize the purpose of the Ideation and Pre-Production process if you view your production in a linear order. When you don’t acknowledge pre-production’s direct impact on the rest of production, you don’t calculate your time accurately. You must put time, money, and energy into prototyping, decorating, integrating, testing, and supporting every idea you devise. This process naturally creates an aggregating effect on your production timeline. As a result, your production does not grow linearly as most people think.

During ideation and preproduction, your work grows exponentially into pre-production. Whether you plan for it or not, several unforeseen issues will occur when you try to attempt a new task, connect one prototype to another or put the product through testing. The more complex your product, the more features it has, and the more places these issues can hide. By recognizing your production timeline as a cube, you can better utilize your ideation and pre-production to create more reasonable expectations when you enter production.

Let’s demonstrate this effect with an example. But first, let’s plan the production of a simple platformer.

When we start with an idea, our work seems straightforward. Then, we go through a research, brainstorming, and prototyping process to determine what product we are building. Now is the only time we are working linearly; however, it’s still important to consider the rate of your project will scale as you enter into pre-production. Once you recognize the exponential nature of growth during this transition, it will become apparent why the old linear thinking led to so much unforeseen work and problems. 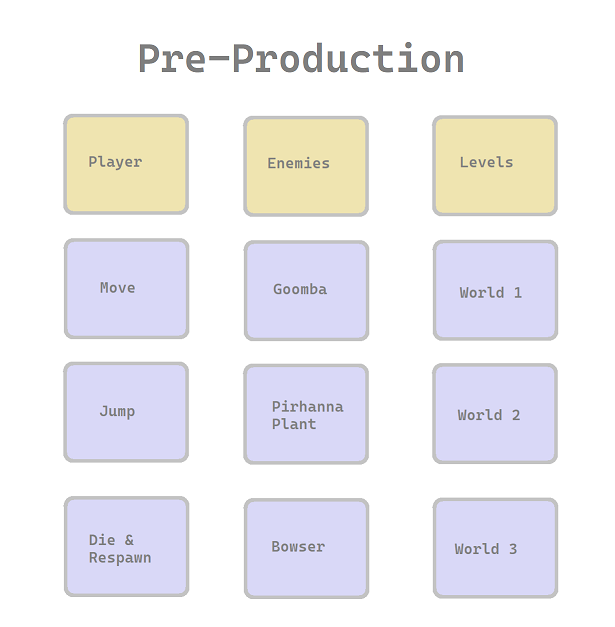 Once we’re in the pre-production phase, we can start fleshing out our original idea. We know what we want to build but don’t know how to build it. What are all of the moves? What do our enemies do? How many levels do we have? Preproduction is all about answering as many questions as you can. The more ideas you come up with in the last phase, the more questions will need answers.

Naturally, this example was an oversimplification of a development process. The purpose was to demonstrate the importance of adequately planning your ideation and pre-production to ensure a healthy and achievable production phase. If you don’t constrain your ideas, you may find your game design quickly becomes much more complicated than intended. If you don’t constrain your game design, you may find that your development takes significantly longer than expected.

When you execute your project timeline, the events will occur in a linear order. However, it’s essential to understand that the more work you do during your ideation and pre-production phase, the further you get from releasing a quality product. Therefore, it’s vital to understand how your work scales when working within a limited budget and timeframe. Otherwise, it will be impossible to set achievable expectations.

A very passionate game designer may pour a lot of passion into their pre-production. Their first instinct is to spend as much energy and attention on the game’s design, making their production a cakewalk – since they have already planned everything out. With this logic, the game designer plans a production timeline of 10 months. Based on everything they spent the past five months planning, they’ve determined that the rest of the development will only take five more months.

Once the developer reaches their production phase, though, unforeseen problems occur. Features could have been more impressive and needed more iteration than intended. Instead, they rushed in unplanned work, leading to many bugs that slowed progress. The problem immediately becomes apparent. The original idea was over-scoped, and the initial timeline was unachievable. One of two things happens, cut features or crunch workers. Either way, morale starts to go down, and burnout ensues.

At this point, everyone almost always recognizes they could have saved this disaster if they had done things differently in pre-production. However, hindsight is useless and leaves you with no choice but to move forward. Yet, they fail to recollect the error and fall for the same mistake when they move on to the next project.
The key to breaking this cycle is recognizing that your plan grows exponentially but executes linearly. You can successfully scope your production if you learn to constrain your preproduction. 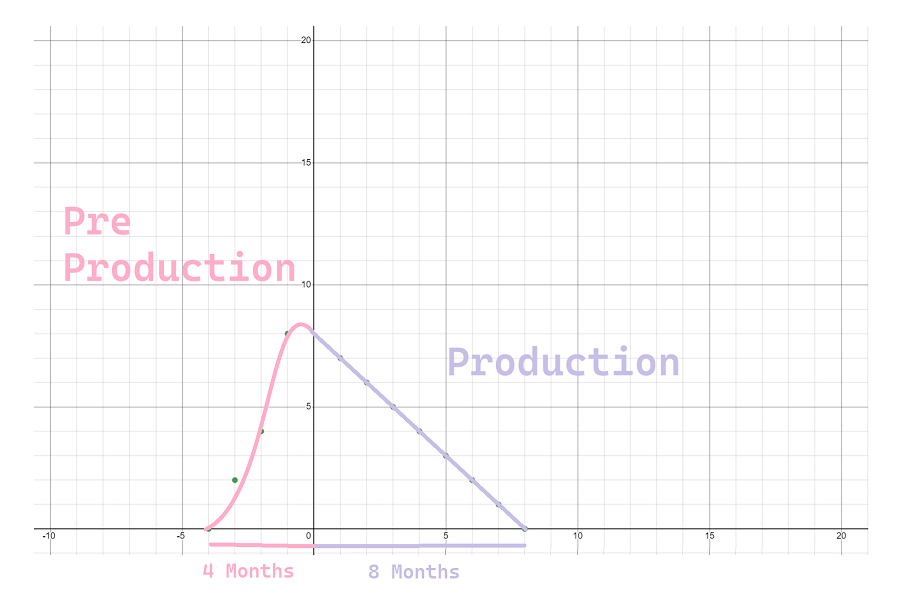 Once this calculation is corrected, it is easy to see how much impact your pre-production has on your production. By simply going from 5 months to 4 months of design, we shave off 12 months of production.

Large-scale productions are challenging work. Especially at an amateur level, most projects fail because the developers need to constrain their ideation and pre-production properly. The assumption that your production scales linearly will set you up for impossible expectations. Only once you see the exponential growth of your work during pre-production can you understand how to estimate and scope your production timeline properly.

The developers need to constrain their ideation and pre-production. The assumption that your production scales linearly will set you up for impossible expectations. Only once you see the exponential growth of your work during pre-production can you understand how to estimate your production timeline correctly.